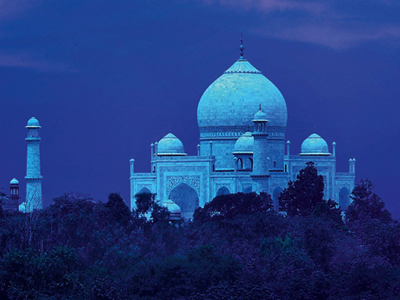 Located on the banks of the river Yamuna and home to one of the 7 wonders of the world, the Taj Mahal, Agra is a must visit for tourists and Indians.The crowded streets of this vibrant city in Uttar Pradesh, once the capital of the mighty Mughal empire houses some of the most beautiful architectural miracles of the world.

Our  driver will pick you from your pick-up  point and drive you to the historical city of AGRA,the capital of the Mughal empire( 3.5 – 4 hrs journey).Upon arrival in Agra  our guide will meet up with you .

Your first stop will be the wonder of wonders: TAJ MAHAL ( 1631 AD ), one of the seven wonders of the world. The Taj Mahal is an enormous mausoleum built by the grieving emperor, Shah Jahan on the southern banks of the Yamuna river, to house the mortal remains of his beloved wife Mumtaz Mahal and is the greatest ever architectural tribute to conjugal love.With legends retold by the guide you will be transported back into history to relive those times.

After lunch it will be time to visit the magnificent AGRA RED FORT (1573 AD), made in red sand stone and famous for it’s colossal architecture. This bastion of the mighty Mughals is a UNESCO world heritage site with many marvelous palaces and halls, During the time of Akbar, the fort mainly served military purpose,while by the time of Shahjahan it also served as a palace and court. The magnificent 20m tall walls,towers, bastions and ramparts and majestic gateways symbolized the confidence and power of the Mughal emperors. There are a number of exquisite buildings like Moti Masjid(a white marble mosque akin to a perfect pearl), Diwan-e-Am, Diwan-e-Khaas, Musamman

Follow this  with visit to MEHTAB BAGH for  fantastic view of Taj Mahal from the other side of River Yamuna.It is also known for the Black Taj foundation,a black marble mausoleum planned by emperor Shah Jahan to house his own tomb.It is a beautiful 25acre garden .

Later in the day visit the ITIMAD-UD- DAULAH (1628 AD),also known as the BABY TAJ. Aesthitically located on the banks of river Yamuna, this tomb is also the first marble mausoleum made in India representing a transition from red sandstone to marble.The tomb contains the remains of the parents of Nur Jahan, mother of Shah Jahan.

Return to Delhi by night time savouring  the memories of the day.

Note:We shall pick up all travellers at their requested pick up points in Delhi.Tour price will change depending on transport used.