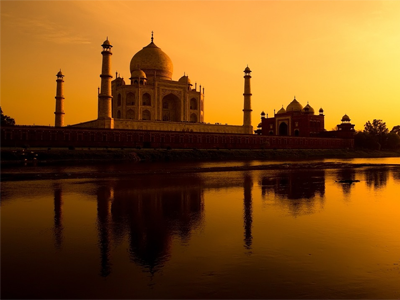 Our  driver will pick you from your pick-up  point and drive you to the historical city of AGRA,the capital of the Mughal empire( 3.5 – 4 hrs journey).Upon arrival in Agra you will check into your hotel ,known for its warm hospitality.

When you are ready our guide will meet up with you .Your first stop will be the magnificent AGRA RED FORT (1573 AD), made in red sand stone and famous for it’s colossal architecture. This bastion of the mighty Mughals is a UNESCO world heritage site and legends told by the guide will recreate it all for you. There are a number of exquisite buildings like Moti Masjid(a white marble mosque akin to a perfect pearl), Diwan-e-Am, Diwan-e-Khaas, Musamman Burj , Jahangir’s Palace, Khaas Mahal and the Sheesh Mahal.

Follow this  with visit to MEHTAB BAGH for  fantastic view of Taj Mahal from the other side of River Yamuna.It is also known for the Black Taj foundation,a black marble mausoleum planned by emperor Shah Jahan to house his own tomb.It is a beautiful 25acre garden .

Later in the day visit the ITIMAD-UD- DAULAH (1628 AD),also known as the BABY TAJ. Aesthitically located on the banks of river Yamuna, this tomb is also the first marble mausoleum made in India also.representing a transition from red sandstone to marble.The tomb contains the remains of the parents of Nur Jahan, mother of Shah Jahan.

Spend the evening shopping for artifacts and memoirs(optional).

Dinner and overnight at hotel.

At sunrise,you shall depart your hotel at 5.30am to experience the stunning sunrise at the TAJ MAHAL ( 1631 AD ), one of the seven wonders of the world.Watch the play of colours at the  majestic Taj Mahal as it gradually changes its hue during the early moments of sunrise.The Taj Mahal is an enormous mausoleum built by the Mughal emperor Shah Jahan on the southern banks of the Yamuna river, to house the mortal remains of his beloved wife Mumtaz Mahal and is the greatest ever architectural tribute to conjugal love.

Return in time for breakfast at the hotel.

After lunch proceed towards FATEHUR SIKRI(1571AD),another UNESCO World Heritage Site.Fatehpur Sikri or the city of victory was once the proud capital of the Mughal Empire in the 16th century.Victorious from battles, Emperor Akbar founded this vast city in the village of Sikri as a tribute to the famous Sufi saint, Sheikh Salim Chishti and also where he prayed for an heir .Fatehpur Sikri, constructed out of red sandstone, is made up of two different parts surrounded by a fortification wall.

In the evening start your journey back to Delhi.En route visit SIKANDRA.In the suburbs  is this lovely tomb of Akbar planned by himself, but built by his son, Jahangir in 1605.It combines both Hindu and Muslim architecture reflecting his secular outlook and patronage of art.His cenotaph  is made of beautifully carved red sanstone, enclosed by high walls and surrounded by lush gardens in charbagh formation.

Note:We shall pick up all travellers at their requested pick up points in Delhi.Tour price will change depending on transport used.