Religion is so deeply ingrained into the life of Indians, which is why they throng to all those places where their spiritual desires can be fulfilled. Mathura is one such sacred place for those seeking spiritual enlightenment.Located around 150 kilometres from Delhi,and 15km from Vrindavan, Mathura is the birthplace of Lord Krishna and has many sites of both historical and religious significance. Krishna in his human form was born to Devaki and Vasudev in the dungeons of the palace of Kansa.To save him from death at the hands of Kansa Krishna was spirited to Gokul where he grew up in the joyful company of the gopas or cowherds.Walking around the narrow bylanes of the city gives you a different taste of India far away from its modernity and steeped in spiritual freedom.

Shri Krishna Janambhumi marks then exact place where Krishna was born and the prison cell where it happened is now on display for tourists to see. Apart from the prison, the Krishna Janambhumi also has a beautiful temple with idols of Krishna and RadhaRani.It is believed that the Mughal emperor Aurangzeb destroyed the main temple and constructed a mosque in its place so high as to dwarf it.

Lord Krishna was renowned for stealing butter and so it is not unreasonable that sweets of innumerable variety including jalebis and gulab-jamuns,snacks like aloo-puri and mouth watering kachodis are available at all street food joints.

One of the oldest cities on the banks of Yamuna is the holy city of Vrindavan. It is the most imporatant place of pilgrimage for Krishna devotees.When Lord Krishna manifested himself on earth his transcendental abode Goloka Vrindavan Dham in the spiritual sky was also manifested on earth as Vrindavan,which is why this 84 sq mile tract of land is not an ordinary material city to his devotees.It is a place where Krishna still resides with his beloved Radha Rani ji. The name of the city has been derived from Vrinda (tulsi plant) and van (forest) with reference to the two small groves at Nidhivan and Seva Kunj.
The city of Vrindavan hosts hundreds of Lord Krishna and Radha temples scattered throughout, the  most popular temples are the Banke Bihari Ji Temple,the ISKCON Krishna Balram Temple, the Radha Raman Temple and many more.Everywhere you look you can feel that Krishna is still indulging in his playful pastimes or leela along with his cowherd friends.

Being such a sacred place many people give up their worldly life to live in Vrindavan.So many widows breathe their last here  believing they are wed to Krishna. 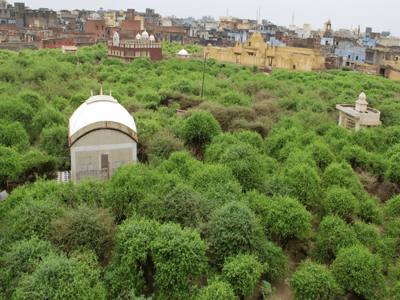 Situated on Raman Reti is one of the most mysterious places in Vrindavan.Legend has it that it was here, 5000yrs back,that  the Raas Leela was performed by Lord Krishna,Radha Rani and the gopis.In fact it is believed that the Raas takes place here every night which is why no one enters after dark.The intertwining barks of the  trees of this forest have entirely different look as compared to the outside.Some say these are the gopis which take their human forms at night.It is also said that anyone who tried to stay the night there returned deaf, blind or mad.The devotion of the musician Swami Haridas,who spent all his time singing His praises here, made Krishna and Radha Rani appear before him and for his sake they materialized into the black idol of Banke Bihari. His Samadhi lies in Nidhivan 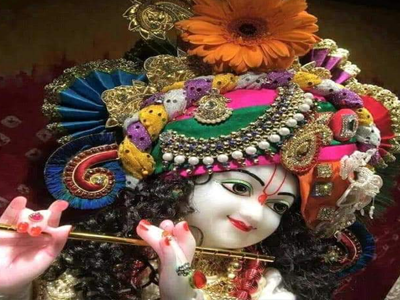 Banke Bihari is one of the holiest temples dedicated to Krishna.. The black idol of God  was given by Krishna himself to Swami Haridas,a true devotee who sang  the Lord’s praises in  a dense part of the forest in Vrindavan called ‘kunj’.Initially the idol was kept in Nidhivan but later upon construction of a beautiful new temple in 1862, Bihariji came to rest there. The upkeep of this temple is done by the Swami’s descendents to this day.During darshan of this lovely idol the priests keep drawing the curtain in front because it is feared Krishna may decide to run away with any of his true devotees or some say that Krishna’s mesmerizing eyes  may cause his devotees to lose consciousness 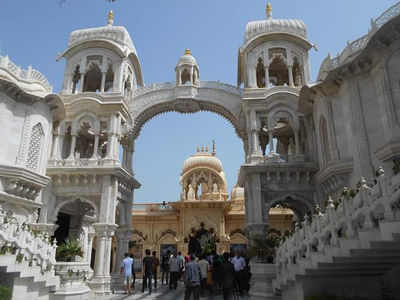 This is one of the main ISKCON temples in the world dedicated to Lord Krishna ,an incarnation of Lord Vishnu and his elder brother,Balram,an  incarnation of Shesh Nag.Srila Prabhupada, the founder Acharya of the International Society for Krishna Consciousness,installed beautiful statues of Krishna Balram,Radha Shyamsunder  and Gaur Nitai in this temple . Srila Prabhupada is attributed to have spread the song of the  Lord ,The Srimad Bhagwat Gita throughout the world Made of beautifully decorated white marble the temple has a serene ambience.In the mornings the temple is filled by the sounds of sankirtans  and bhajans and the evening aarti is heavenly.It has a well developed shopping complex and a pure vegetarian resturant 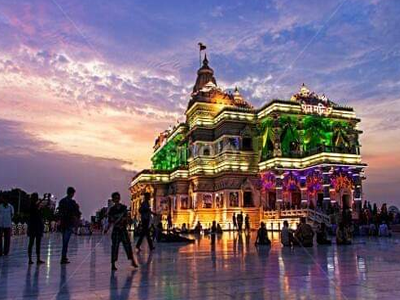 Prem Mandir is a vast and beautiful temple complex situated in Raman Reti  in the holy land of Vrindavan, dedicated to Shri Radha Govind (Radha Krishna) and Shri Sita Ram and established by the fifth Jagadguru Shri  Kripaluji Maharaj, a saint with immense knowledge and love for Shri RadhaRaniji.The temple itself is modern made of Italian marble.The satsang hall is a dome shaped ,pillarless area of 73000sq ft . The ground floor has the beautiful deities of Vrishbhanunandini Shri Radharani and Shri Krishna, along with the eight Mahasakhis, their dearest bhaktas,On the first floor there are beautiful deities of Shri SIta Ji and Shri Ramchandra Ji along with their foremost devotee, Shri Hanuman Ji..

The exterior of the temple is carved heavily with  panels depicting Krishna’s pastimes and all the miracles he performed.Surrounded by beautiful gardens and fountains it is an outstanding temple of unique architecture and grandeur. 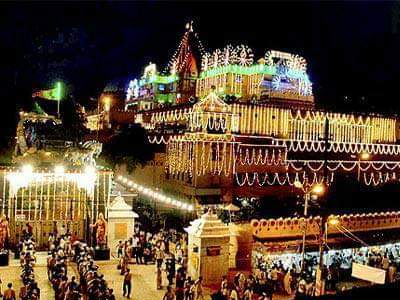 15km from Vrindavan is Mathura,the birth place of Lord Krishna.Krishna, in his human form, was born to Devaki and Vasudev in the dungeons of the palace of Kansa .To save him from  death at the hands of Kansa,the doors of the prison opened up and the guards fell asleepand Vasudev took Him to Gokul where he grew up in the joyful company of cowherds under the maternal love of Yashoda.The garba griha is the prison cell where Krishna was born .In 1670 Aurangzeb destroyed this temple and erected a huge mosque adjacent to it..