India is home to the most diverse and beautiful wild life many of which are endangered.In 1972 A Wildlife Protection Act and Project Tiger were initiated and now there are 104 national parks in the country devoted to protecting animals.
These are just some of them: 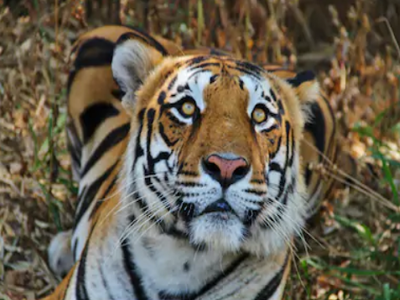 JIM CORBETT NATIONAL PARK
This is the oldest national park in India located in the sub Himalayan regions of Uttarakhand.Formed in 1936 to protect the endangered Royal Bengal Tiger under the Project Tiger,this beautiful terrain comprises hills,rivulets, marshes and grasslands .The core area is 520sq km and the buffer reserve area is 780 sq km.
The dense deciduous forest is most suited to the Bengal Tiger and the reason why it is so elusive.It very often preys on the cattle of the villagers who live inside the reserve.Other animals to be found are leopards,jungle cat,barking deer,sambur deer,chital,himalyan black bears and herds of elephants enjoying the water of the Ram ganga river.Crocodiles,25 reptile species including the Indian Pyhton,586 species of resident an migratory bbirds incl the Siberian vulture

Jeep safaris are the way to travel within the park.and tourists are not allowed tot get off the jeep except at designated spots.Dhikala, bang in the middle of the core area, is the govt guesthouse suited to watching wild life in safety. 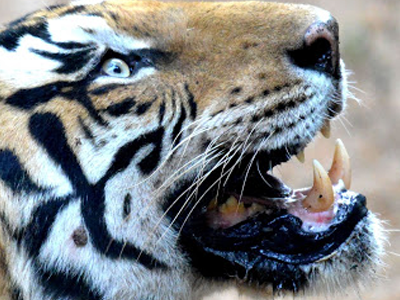 Bandhavgarh National Park  historically a game preserve of the Maharajas has the highest density of the Royal Bengal tigers in the world. There is a saying about the Park that goes: “In any other Park, You are lucky if you see a tiger. In Bandhavgarh,you are unlucky if you don’t see (at least) one.”

It is home to some famous named individual tigersThe female tigress called Sita, who once appeared on the cover of National Geographic, is considered the most photographed tiger in the world.

This national park was established in1955 by the govt of India in Sawai Madhopur and became part of Project Tiger in1973.Ranthambore covering an area of 282 sq km , was enlarged to include Sawai Man Singh and Keladevi sanctuaries in1991.A mix of hills,crags,rivulets,meadows and lakes makes this dry deciduous forest home to a wide variety of flora and fauna.There is also a Ganesha temple,the Surwal Lake and the marvellous Ranthambore fort, a UNESCO world heritage site, a major attraction for wild life and tourists alike.It is not uncommon to find a tiger fast asleep here.
The main attraction is ,of course, the Royal Bengal tiger and sightings are common.Other animals to be found are the leopard,nilgai,boars,sloth bears sambur and chital deer and rhesus monkeys.
The best time to visit is the winter months though the park remains open from October to June.

BANDHAVGARH NATIONAL PARK
Bandhavgarh National Park found in the heart of India, Madhya Pradesh,is a richly bio diverse park home to the largest tiger population in India covering an area of 1536sq km.Once a hunting reserve of the royal family of Rewa the park gets its name from the ancient Bandhavgarh fort believed to have been gifted by Lord Rama to his younger brother Lakshmana.Formed in1968 the main zones in the core area are Tala,Magdhi and Khitauliand of these its the Tala zone you,re looking for because the density of tigers is highest here.The forest itself is tropical with sal and bamboo trees and tall grasslands.
The Bengal tiger shares the forest with the leopard,nilgai,chausingha,chital,chinkara, wild boar and the fox.There are about 250 species of birds and 80 different species of butterfly to be found here.The first white tiger was discovered here by the then Maharaja and now is a stuffed toy in the museum there.These have not been seen for some time now.Unfortunately repleting forest cover and rising mining activity is putting the tiger at risk.Villagers living near the park are suspected to have killed quite a few.
The park is open from 15th October to 30th june and jeep safaris can be done twice a day.

KEOLADEO GHANA NATIONAL PARK
Keoladeo Ghana National Park or the Bharatpur Bird sanctuary , a World Heritage site ,was declared protected in 1971.This famous avifauna sanctuary found in Bharatpur, Rajasthan,withover 366 resident bird species, is popular with orinthologists.Keoladeo is the ancient Shiva temple and Ghana means the thick vegetation found here,hence the name.The park has a man made wetland formed by the flooding of water from the Ajan bund built by the Maharaja of Bharatpur in the eighteenth century.It became a hunting ground for the royalty and their British guests.Spread over 29 sq km,this dry deciduous forest is mainly tall grasslands and swamps.
This diverse habitat suits the 366 bird species living here.Other animals include a wide variety of flowers,50 fish species,7 turtle species.,lizards and snakes like the cobra,krait and russells viper.Python holes are not uncommon..Every winter thousands of migratory birds descend here to nest and pass the cold weather abroad.One such beautiful water bird.the Siberian Crane used to visit here but is now extinct.The nilgai and chital deer are also to be found here.
The park is open through the year but October to February is the best time to see the migratory birds.A jeep safari or rickshaw safari is the ideal way to spot the exotic birds and animals that inhabit this jungle.

KANHA NATIONAL PARK
This is the land of Rudyard Kipling’s classic Jungle Book.Kanha is one of India’s largest national parks situated in Madhya Pradesh and one of India’s finest tiger habitats. The tropical forest is a mixture of sal over an area of 2117 sq km .It receives nourishment from the Banjar river, a tributary of the Narmada .There are 4 different zones:Kisli,Mukki,Kanha and Sarhi.This forest was originally inhabited by two indigenous tribes and these are still being evacuated and relocated from the protected area. Their future is a different story altogether.In 1862 cutting ofeconomically important trees like sal,red wood and teak trees was prohibited without permission and finally it became a Project Tiger Reserve in 1973.Another conservation story is that of barasingha or swamp deer which were victims of poaching for their skin and beautiful horns.Special enclosures were made inside the forest for breeding and protection for this ‘jewel of Kanha’.
There are 125 Royal Bengal tigers including cubs.other wild life include the panther,sambar,barasingha,chital,black buck,sloth bear, langur and wild dog among others. Reptiles like the python,Indian cobra.krait and the russells viper abound.Water bodies are rich in fishes and there are atleast 300 species of birds.
The park is open from October to June but remains closed during the monsoon as the roads are not navigable.Best season to visit is February to June.

VALLEY OF FLOWERS NATIONAL PARK
This park is located in high altitude Himalayan valley Pushpawati , in North Chamoli in Uttarakhand.This colourful park was formed in 1982 and is a World Heritage site.There are fields of sweet smelling wild flowers,wild rose bushes and strawberries.It is home to some rare animals like the black bear, snow leopard,musk deer and the red fox.The inventory records 520 alpine plant species.
A trek is the best way to climb up to the valley.Permits are needed inside and treks are in the day only.The best time to see the flowers is just after the monsoon from July to September.

SARISKA TIGER RESERVE
This tiger reserve located in Alwar,Rajasthan covering an area of 866sq km is of dry deciduous type of forest.Once a private hunting preserve of the Maharaja of Alwar,after Independence became a hunting destination for villagers looking for land for agriculture.The national park joined the Project Tiger in 1979 and was declared a fully fledged park in 1990. Its topography resembles that of Ranthambore supporting scrub thorn arid forests,rocks and grasslands.It is therefore not surprising some of the 18 tigers of Sariska are those that have been successfully relocated from Ranthambore.The most common tree is Dhok.There are ruins of 11th century temples of Garh Rajor and a 17th century Kankwadi fort where apparently the Mughal emperor Aurangzeb had imprisoned his brother in his quest for the throne.The Neelkanth and Pandupol Hanuman temples are pilgrimage sites The park circles the Siliserh Lake and Jai Samand Lake home to crocodiles.
Wild animals other than the Tiger comprise leopards,sambur,jungle cats,hyenas,cinkaras,chausinghas,wild boars,nilgai,langurs, mongoose and porcupine.225 species of birds live here like the grey partridge and crested serpant eagle.
Jeep and Canter Safaris are available in the mornings and evenings.The best season to visit this reserve are the winter months from October to February.

KAZIRANGA NATIONAL PARK
Kaziranga National Park in Assam came into being in1905 at the behest of Lady Curzon,wife of the then Viceroy of India,.when she was unable to see even one rhino. In1985 it eventually became a UNESCO World Heritage site.The world’s largest number of one-horned rhinoceroses ,approximately 2413 ,live here.The natural habitat with tropical forests and marshlands make it ideal for the rhino .The Brahmaputra river among others brings with it silt enriching the soil.The total area of 430sq km is a flat plane with swamps,sandy riverine islands interspersed with tropical forests.More recently the severe floods in Kaziranga brought to the fore that floods are an every year occurance.Tourists are allowed in 3 zones:Kohora,Bagora and Agartoli.
In 2006 it also became a tiger reserve housing 118 tigers. Other wild animals include the jungle cat,leopard,sambar,langur,gibbon,hares,mongoose,civets,fox,jackal,pangolins and sloth bear.It is also a haven for migratory birds.Two of the world’s largest snakes,the reticulated python and rock python are also found here.
November to April is the best time to be here .Goverment arranged Jeep safaris in the morning and evening are the norm.We do not support elephants being used for safaris.

RAJAJI NATIONAL PARK
At the foothills of the Himalayas in Uttarakhand is this national park that is devoted to the protection of the Indian elephant.In 1983 Chilla,Motichur and Rajaji sanctuaries were merged into one national park, over an area of 820sq km.The Ganga river passes through this park provides the nourishment for the forest cover which is diverse ,ranging from broadleaved deciduous forest to pine trees, from riverine vegetation to grasslands.
This natural environment boasts of the largest number of elephants,about 500.It is also a tiger reserve.Other animals you will see are the chital,sambur,barking deer,nilgai,wild boars and the sloth bear.Unfortunately depletion of forest area has lead to animal human conflict with the pachyderm often being the loser.
The park is closed between 16th June to 16th November. Jeep safaris are arranged at the gate in morning and evening shifts.